Virtual networking – yes, you really can network in your pyjamas! 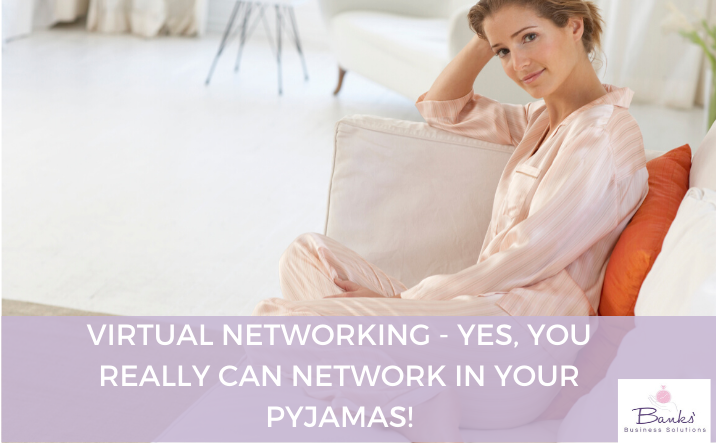 Like most business owners, you’ll have been to at least one early morning breakfast meeting to network with other business folk. If the thought of selling yourself in a room full of strangers wasn’t bad enough, dragging yourself out of bed on a cold, dark morning probably prevented from making a return visit. Or maybe you really enjoy networking but you haven’t taken the step into the online version yet, and wondering what’s the point?

What if you were able to network in your pyjamas from the comfort of your home?

As marketing efforts are becoming increasingly online based, and many businesses owners are working from home – wouldn’t it make sense to combine the two? Just like those early morning breakfast meetings, ‘virtual networking’ can open the door to new contacts, prospective customers and improved credibility.

So what does ‘virtual networking’ mean?

‘The practice of expanding one’s business contacts by making connections with individuals through social media sites and apps’ (WhatIs.com).

In a nutshell, it’s talking to people online with the aim of getting more business, specifically using social media or networking websites. You’re probably already doing it if you’re in a business related Facebook or LinkedIn group.

However, just like real time networking it is ‘work’ and you need to prepare, perform and evaluate to get results. As a strong form of marketing, how you come across networking can make an incredible difference to your business brand and reputation.

So how do you go about networking online?

Prepare
Like any type of marketing, you need to be setting SMART goals.

You might think it is pointless talking to a group of tradesmen when you sell beauty products, but what contacts could they introduce you to? Like real time networking, it’s not about who’s in the room, but who they’ve got in their address book.

Here’s where the key difference between real time and online networking lies. In real time, you’re talking just to the people in the room and hoping they will introduce to the contacts you’re looking for. What you post on social media, however, is in the public domain – so you never know who might be reading it. Even in a closed group – screengrabs and share buttons can be your friend, or your enemy.

You’ll need to do some research to discover the right online networking groups and sites for your particular needs. This largely comes down to trial and error. Consider the social media channels that you’re already using for your marketing – most have a form of networking you can join straight in with. Facebook and LinkedIn have groups. Twitter has dedicated networking hours based on location, profession, industry, etc which use hashtags to bring everyone together.

As part of our virtual networking strategy here at Banks’ Business Solutions, we use a variety of social media sites. From Aspiring Business Women which has groups on Facebook, LinkedIn and a very active Twitter hour on a Monday evening using #ABWhour, to virtual assistant and web design groups. Every group and twitter hour we take part in enables us to share our expertise, chat with a range of business owners we wouldn’t normally meet and, of course, we’ve gained new clients too.

Perform
Ok, so not being yourself is a bad thing to do with any form of networking or marketing, so don’t think you have to put on an act. At the same time, virtual networking isn’t a case of having a friendly catch up with friends – it’s still work!

So you need to present yourself appropriately to your audience. You are representing your business – your credibility is being put to the test! So you need to act accordingly. If you wouldn’t do or say something at a real time networking meeting, you’re best keeping it offline too.

Evaluate
Remember those SMART goals you need to set before networking? Make sure you regularly review and evaluate them.

Return on investment can be difficult to evaluate as most online networking is free, or considerably cheaper to its real time counterpart. It’s also a slow process building up your brand and reputation to the point where people know and trust you enough to introduce you to their contacts. However, you’re probably getting a lot more out of it than you realise. Peer support, business advice, improved SEO, latest industry updates, etc. All of these are invaluable to any business owner and they’re right there when you start networking online.

Virtual networking is a minimal expense that can bring a range of rewards and opportunities to your business. It really is worth finding the time to network with other businesses online – you never know what might happen after a Twitter conversation or Facebook group chat!

We use cookies on our website to give you the most relevant experience by remembering your preferences and repeat visits. By clicking “Accept”, you consent to the use of ALL the cookies on our site. However, you may visit Cookie Settings to provide a controlled consent. Read MoreRejectAcceptCookie settings
Cookie Policy