Not All Networking Is For Everyone, And That’s Ok! 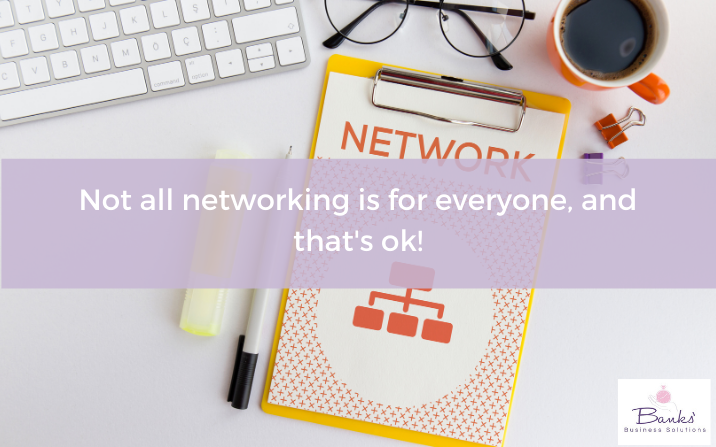 Not all networking is for everyone, and that’s ok!

We all know that networking is important. It’s by getting to know other people, both in and outside of your industry, that can open the door to new clients, opportunities and even change how you run your business from the experiences and insights of others.

But networking can be difficult to get started with.

I remember walking into my first ever networking meeting terrified and leaving thinking if this is networking there is no way I am going to be doing it! For me, the meeting was far too formal, and the way I was approached by the others in the room didn’t suit my personality. 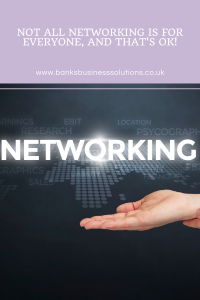 Find the right type of meeting for you

Thanks to Covid-19, the networking landscape has changed dramatically. Many meetings are now taking place online via Zoom rather than in-person while others have been postponed entirely due to lockdown restrictions. While this can make meetings accessible in some ways, it can also make it harder to find the right networking meeting for you, so much so that a lot of people are taking a break from networking until meetings are back to normal.

I don’t do well with online networking when it comes in the form of video calls – I find them exhausting and really struggle to find my voice in a large group on zoom – due to this I have withdrawn from a lot of networking recently.

Before March 2020, I had tried lots of different groups including women-only groups and mixed ones. Through trial and error, I found that relaxed networking over food is the best way to really get to know people, but I also like meetings where you get time for “121s” with people – even if that is only 10 minutes it is a great start to conversations.

I think you should consider what’s really important to you when it comes to networking. What do you hope to gain and does that networking group look like it could further your goals? If you find online video calls draining, or simply don’t enjoy them, is there an alternative you can explore right now?

Remember that networking can happen without meetings

Social media groups are a great way to network with others online and without the need for video calls. It’s a great way to build connections even though you aren’t in a defined networking space and it can still lead to those 121 calls, meetups and the same opportunities that traditional networking can offer.

One of my favourite ways to network is whilst out for a walk either 121 or in a small group – it means I can combine my love of walking, get my daily exercise and chat with other business owners at the same time – it’s not conventional but it works for me!

Some networking groups do have their own social media groups too, so it can be a good way to dip your toe into the water and get a feel for the members and how things are done before jumping into more formal sessions (and can be a great way to get past those first times nerves too!)

I am an advocate of networking when you find the right group for you and the right way of doing it, but I do realise that for some people it’s difficult to find that perfect fit.

Networking is just one form of marketing. As with marketing in general, you have to find the right methods and channels for you and your business. Just because other people are finding great success with their way of doing things, doesn’t mean that you will too. They’re not you!

I believe you should give it a try with an open mind and remember that every group is completely different (even those belonging to the same umbrella organisation), so it might take a few attempts to get right. But if you keep going to different events and continually finish a meeting feeling drained, disappointed, frustrated and that you’ve wasted time, it’s ok to draw a line under it and try a different marketing method instead.

Networking isn’t for everyone, and that’s ok!

We use cookies on our website to give you the most relevant experience by remembering your preferences and repeat visits. By clicking “Accept”, you consent to the use of ALL the cookies on our site. However, you may visit Cookie Settings to provide a controlled consent. Read MoreRejectAcceptCookie settings
Cookie Policy